As an example of Adaptation, I recently watched the movie, “Prize Winner” I also read an excerpt from a book of the title. Here are my thoughts on the difference between the two. 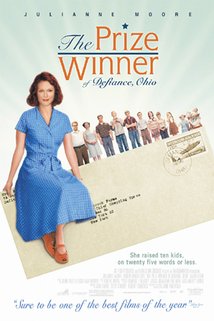 During the movie there is a notable Supermarket Sweepstakes scene. There are many similarities and differences between the publication and the feature on the silver screen.

One significant difference I noticed between the excerpt and the film scene was the presence of the father. He is not given any lines in the excerpt but does have dialog in the scene. He discusses he wants to try the fancy cocktails in jars, and then at the supermarket he oils up the wheel of the cart before the sweepstakes begins. I liked this change because it demonstrated his willingness to help with her in the contest as well, like the kids are shouting the time to keep her on schedule. In the film we cut directly from the kitchen when they are discussing the contest to the sweepstakes and there is no moment in the car to show him driving, or maybe comforting her as she gets nervous, which is indicated in the excerpt. So the addition of oiling the wheel demonstrates this instead.

I imagine the script for this screenplay was written similarly to most others, and is being told from a Dramatic POV meaning it is told in a way that we are not conscious of a narrator, for the writer doesn’t comment on the action but simply describes it, telling us what happened and what the characters are doing so we get the feeling we observing the events as they are watching.  I get this sense because at the end Woody Harrelson dabs his eyes with his handkerchief, but the script would not have told him how to do it, but just the plain fact that the character does the action.

This entry was posted in Papers. Bookmark the permalink.